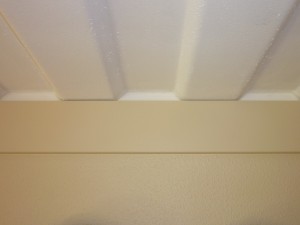 Those of you that have been following this blog for a while already know that I left the shipping container roof exposed on the inside and insulated it on the exterior instead.  There were a couple of reasons for this.  First, I wanted to preserve as much vertical space as possible in my cabin.  Second, I actually like the look of the corrugated ceiling.  There was one problem with this design choice however; how to trim a ceiling with corrugations.

One method I have seen employed before (which I think has the nicest appearance) is to cut and finish the drywall to fit within the corrugations.  The problem with this, from my standpoint at least, is that I’m a rank amateur when it comes to drywall and it would have taken too much time and probably not looked very good in the end.  If you’re hiring a professional drywall finisher in the first place, this would probably be the best way to go. 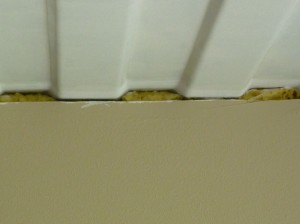 Another option I almost went with, and even bought the tool to do it, was to scroll saw the corrugated pattern out of the trim itself.  At first glance it might seem like a good option, but I found out that the corrugations are not consistent in either the horizontal or vertical planes.  I would have had to trace every corrugation onto the trim with some sort of vertical offset jig.  In addition to that, my trim boards for the non-corrugated walls would have needed their heights trimmed down to match.  Thankfully I came to my senses just in the nick of time.

What I did instead, which ended up being very easy, was to install thin aluminum tabs behind the trim boards that extended up into each corrugation.  I first made a template that would fit into the upward portion of a corrugation and overlap a few inches onto the drywall.  The tabs were then cut from aluminum step flashing using the template.  I ended up needing 50 tabs total for both side walls of the cabin.  Cutting the aluminum with Fiskars Shop Snips was much easier than I thought it would be – almost like cutting heavy poster board with scissors.

For convenience sake I painted the tabs before I put them in place, although I’m sure they could have been painted afterwards as well.  I affixed the tabs to the drywall using Loctite Spray Adhesive.  It did take a few tries to figure out the right amount to spray on both the drywall and the tabs so they wouldn’t fall off.  After the tabs were glued into place, I caulked the seams between the tabs and the ceiling, and screwed the prepainted trim boards to the wall.

A word of warning to all the perfectionists out there, of which I’m one; this is not a “perfect” solution.  As I mentioned before, the corrugations are not vertically consistent.  Some of the downward corrugations abut the trim boards, while others have about a 1/8″ space between them.   Overall, it does look really nice and I’m pleased with my choice.  I plan on having some pics of the finished interior up in the next few weeks, so you’ll be able to see everything in context then.