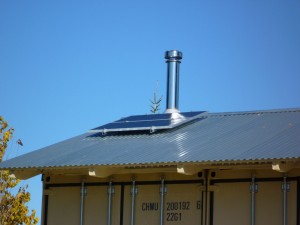 Up until two weeks ago I thought I had my solar panel mount plans finalized – a single pole mount to the east of the cabin.  That WAS the plan until I found out someone had gone through a lot of effort to steal from my property – more about that later.  I’ve now settled on two separate locations and mounting systems for my solar panels.  Phase one, last weekend, was installing a permanent roof mount for two panels where theft should not be a concern.  Phase two will be a ground mount with a quick attach/detach feature so the panel(s) can be stored in the cabin when I’m away. END_OF_DOCUMENT_TOKEN_TO_BE_REPLACED