This is a task that has spanned more than a year and a half.  It’s not that it had to, it’s just that there always seemed to be something more pressing to do.  I did finish the interior portion of this in April of 2010 right after I had the interior container walls removed.  That worked OK for the first winter, but I really needed to finish it before this winter to avoid any cold spots on the few metal wall remnants that are just behind the drywall.  There was a small amount of condensation on them last winter, and I’m sure it was due to the cold air reaching deep into the gaps.

The most common method I have seen to seal the gaps between containers has been to weld steel plate on the outside.  Not being a welder, I wanted to figure out something that I could do myself.  I also had new containers in a decent color that I wanted to keep as original and attractive as possible.  My plan was to use a combination of backer rod, spray foam, and caulk to seal everything up.  The picture above shows the finished product on the back side of the cabin, and I must admit it looks better than any welding job I could have done.

The first thing I did when the walls were removed was to install some foam backer rod between the containers.  I recommend getting a variety of sizes since the gaps can vary.  I tried to place the rod at a consistent depth using a marked plastic drywall knife.  This was in place by itself for a couple of months in the spring, and it did at least keep the bugs out of the containers. 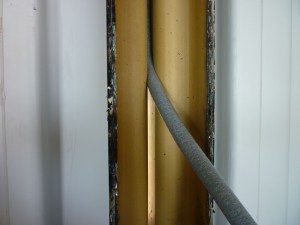 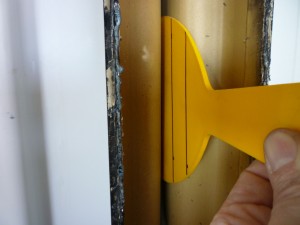 The next step was to seal the inside gaps with some Great Stuff foam in a can.  As you can see in the picture below I didn’t have to be too careful since it was going to be covered with more spray foam in addition to the drywall.  You can see the metal wall remnants here that come right up to the back of the drywall. 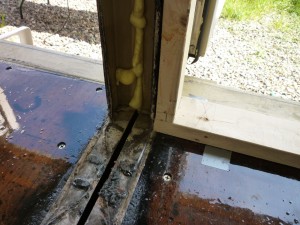 A few weeks ago I was able to finish the outside gaps.  After some research on foam insulation and mice, I felt it would be prudent to include some sort of barrier in the gaps just in case.  I decided on a layer of coarse steel wool over the original backer rod I had installed from the inside.  I don’t think mice would have made their way through the foam, but it was only a few dollars for the steel wool and 30 minutes more time.  Better to err on the side of caution when it comes to mice. 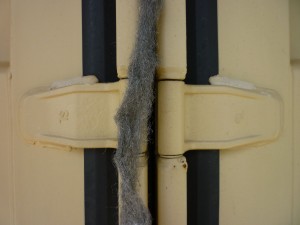 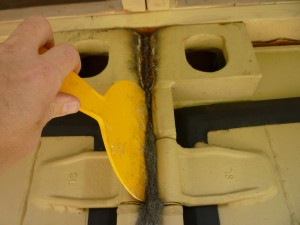 After the steel wool was in, I added another layer of Great Stuff foam.  This was the hardest part of the project since I had to keep the foam at a consistent depth for the final layer of backer rod and caulk – I had to continually scrape away the foam as it expanded and dried. 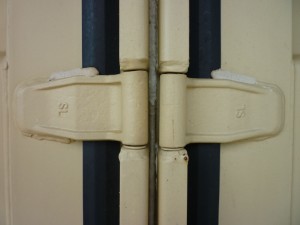 I then placed another layer of backer rod on top of the foam as a base for the caulk.  The rod was probably unnecessary, but I thought it might help me create a more consistent base. 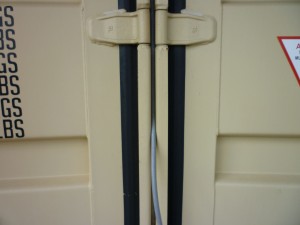 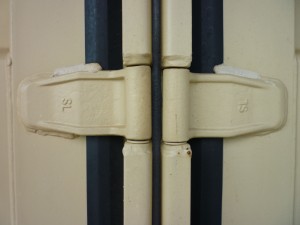 The final finish was a layer of OSI Quad caulk.  While this is great caulk, I found it a bit harder to get a smooth finish than others.  It’s also a pain to get off your skin.  Here’s a closeup of the finished gap on the backside of the cabin.  I could have gotten a better color match with the caulk, as Quad is available in hundreds of colors, but I would have had to special order an entire case.  Since I only needed four tubes, I used a stock beige color which actually looks OK. 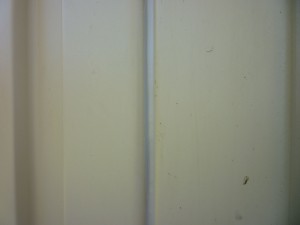 13 thoughts on “Sealing the Gaps”