The kitchen will be a work in progress for a while longer.  The cabinets, countertop, sink, and cooktop are in, but the plumbing probably won’t be installed until spring.  As a temporary measure I’ve modified an old galvanized steel cooler to serve as my kitchen faucet and water supply.  It works fairly well even though it does have a low flow rate.  I can even add water heated on the cooktop or wood stove to it if I need warmer water for dishes.  For the waste water I have a 5 gallon bucket hidden under the sink. 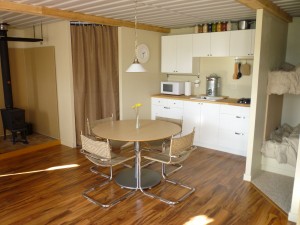 A question I’ve already been asked is: where’s the refrigerator?  I tried to find a refrigerator that was solar friendly, under the counter, and reasonably priced, but couldn’t.  The closest I could find was a Coleman Stirling Power Cooler.  It’s very energy efficient and runs directly off 12VDC, but it only has a 26 quart capacity and is in the shape of a cooler.  What I really want someday is a Steca PF 166 refrigerator/freezer.  The Steca would have six times the volume of the Coleman and wouldn’t use much more power – they claim it can run off a single 70 watt solar panel.  Since neither of these can be readily installed into a standard kitchen cabinet, I decided to make space for the refrigerator in the storage room, which is also where the 12VDC power outlets are.

I also passed on a range in favor of a simple two burner propane cooktop.  I didn’t plan to do much baking at the cabin, and I would have hated to lose the cabinet – I need all the storage space I can get.  For the few times that I might want to bake something, I plan on getting the Omnia Oven that lets you bake on a cooktop.  It’s only $50 or so and gets good reviews from the boating community.

The microwave oven that you see in the pictures will probably end up going away.  Since my power inverter is only 300 watts, I can only operate the microwave when the generator is running.  The plan is to eventually rely solely on the solar panels and not have the generator up there at all.

Here’s a closeup of the temporary water supply and disposal.  I can’t help but think there’s a Jeff Foxworthy joke for this: “You might be a redneck if your plumbing is a five gallon bucket under the sink”. 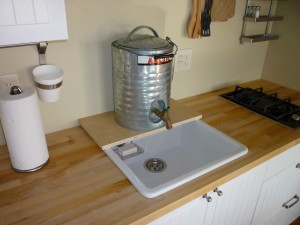 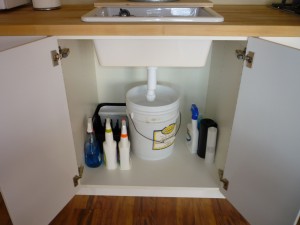 22 thoughts on “Kitchen with Temporary Plumbing”