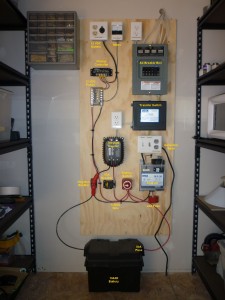 I just finished installing most of the electrical outlets and switches this past weekend, and thought it would be a good time to discuss the power system.  It’s an off-grid system, mostly out of necessity, as I’m about 2/3 of a mile away from the nearest power line.  As convenient as it would be to have grid power, for me at least it’s not worth the considerable cost of running a line that distance.

The main source of power for the system will be several solar panels, which will be installed this summer, in addition to a generator for backup and power tools.  Running just from the battery, the system can output a continuous 300 watts of 115 VAC.  While that’s not a lot of power, it’s more than adequate for my needs.  I figure I’ll be running maybe three to four 9 watt CFL lights at any one time, and maybe recharging a laptop or cellphone now and then.  Some planned future loads, such as the water pump and Coleman Stirling power cooler, will run directly off 12VDC to avoid the inverter losses.  If I need more power, or have to top off the battery bank, I’ll use my portable Honda eu2000i generator I usually bring along.

Aside from designing the cabin itself, I probably spent more time designing the power system than anything else.  Having little to no electrical experience, designing a properly sized solar system was difficult.  I’m not sure I would have been able to do it correctly without the Solar Electric Power Discussion Forum and Northern Arizona Wind & Sun who hosts it.  The members of the forum, and the people at NAWS, were extremely helpful to a solar newbie like me.  NAWS also carries most everything needed for an off-grid solar setup like mine, and offers excellent technical support to boot.

The specific components I used are as follows:

Uni-Solar US64 solar panels.  These are 64 watt flexible thin-film photovoltaics mounted on a steel backing plate.  There’s no glass on these and it’s beneficial in that if a single cell is damaged, say from hail or vandalism, the rest of the cells in the panel will continue to function.  Unfortunately these are now discontinued and are still relatively expensive, on a dollar per watt basis, if you can find them.  I only have two of these, which is probably not enough, so I will have to find some old stock somewhere or buy another brand.

Morningstar SS-10-L solar charge controllers with low voltage disconnect.  While these are very good units, I would not necessarily have chosen them except for the fact that I got a great deal on two new units in an eBay auction. I do recommend the low voltage disconnect feature though if you plan to have any 12VDC loads hooked up to them.

Morningstar SureSine 300 watt sine wave inverter.  This is the best small sine wave inverter you can get in my opinion.  It has the lowest stand-by power usage, at 55mA, of any inverter I’m aware of. A similar 300 watt unit from Samlex, at half the cost, uses 700mA – that’s a lot of wasted power for standby mode.  Don’t be tempted by the cheap modified sine wave inverters as they can damage certain electronic devices.

Concorde SunXtender 104 Amp-Hour AGM (absorbed glass mat) deep cycle battery.  Since I really can’t do justice to a battery discussion here, I strongly recommend reading the excellent Battery FAQ at NAWS.  What I will discuss though is the use of AGM batteries.  The main advantage to AGM batteries, for my purposes at least, is that they are resistant to freezing.  Since my cabin is in northern Wisconsin, and unheated most of the winter, I wanted the peace of mind that my batteries would not freeze. Another benefit is that they do not release hydrogen in the amounts that flooded batteries do and can be kept indoors without a vented battery box in small numbers.

Iota DLS-30M battery charger.  While a battery charger is not a necessity, it is useful if you have a generator tied into your system.  If you’re going to be running your generator anyways, you might as well be charging your batteries at the same time.  It’s also useful in winter for those short or sunless days.  Make sure to choose the proper amperage charger based on the size and type of your battery bank.  The IQ4  Smart Charger, either integrated or as an add-on, is also nice to have for a more complete charging process.

All of my 12VDC fuses, breakers, and switches are made by Blue Sea Systems for the marine industry.  Unfortunately, the online company I purchased these from does not carry Blue Sea anymore, but I will provide the links to the products I used on the Blue Sea site.

Most everything else, such as the wire, AC breaker box, outlets, and switches, I was able to pick up at my local hardware store.