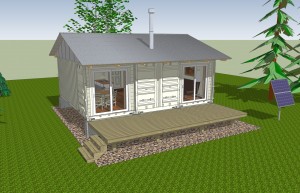 A reader the other day asked about reversing the middle container so the doors could be opened all the way.  I told him that many of my first designs did this, and that there was a lot going for that configuration.  Since I haven’t been to my cabin for a while, and have been short on new posts, I thought I would show what this configuration would look like.

Probably the greatest benefit to this design is the ability to open the container doors all the way, allowing for greater views to the left and right.  They could also be opened half way, as in my current cabin, to block additional summer sun or inclement weather if necessary.  Overall it’s a very versatile design that I almost went with.

The biggest negative from my standpoint was the entry door on the rear (northern) side.  The way my building site is situated the best place for the entry is on the front (southern) side.  The southern side also has the best view which is where I wanted the deck.  You’ll notice I included sliding glass doors on this design for easy access to the deck and as an alternate entry in good weather.  I personally don’t like sliding glass doors, especially in the winter months, but I know a lot of people do.

The interior layout of this design also has a lot going for it.  The kitchen is larger and a bit more open, the dining area is separate with a better view, the wood stove is centrally located, and the bathroom and bedroom are more amenable to real doors.  The only thing I couldn’t fit in real well was a desk, although maybe that would be a good thing.

I do need to be careful here.  While I was building this in SketchUp last night I was starting to have some builders remorse.  I’m not unhappy with what I’ve done,  its just that I’d like to have to have my cake and eat it too.

14 thoughts on “An Alternate Design”