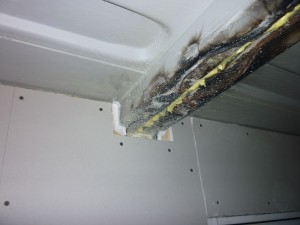 These were the last uncovered remnants from removing  the walls with a cutting torch.  Two 2.5″x5″x18′ beams on the ceiling of the cabin – not a pretty picture.  Maybe if the walls had been cut with a plasma cutter they could have been used as is, although I think there are better options.  The easiest thing to do in my mind was to just build some fake wood beams around them. 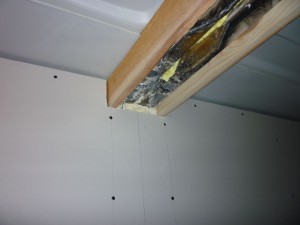 I decided to use cedar for the beams since it’s lightweight, easy to work with, and is naturally moisture and rot resistant.  The latter is just in case some condensation forms on the steel beams and gets on the wood.  A small amount did form on the back corner of one of the beams the last time I was there, although that’s probably due to the insulator not foaming the steel beams on top of the containers correctly.  I’m confident that when I get to properly insulate the beams this spring it shouldn’t be a problem.

I wanted to keep the height of the beams as small as possible, and I’m lucky that a 1″x4″ cedar board was the perfect height as is.  The boards need to be cut out in a few places as you can see, and the back sides also need their upper edge removed to clear the welds that are present.  The nice thing is, since this is cedar, many of the minor adjustments can be made with just a utility knife.  To attach the boards I just used some countersunk flat head self threading metal screws.  BTW, I did have to pre-drill the beam with a cobalt bit first. 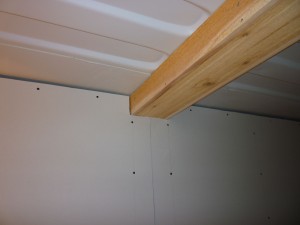 The bottom board was a 1″x6″ with about 3/8″ removed from one side.  While a table saw would have been useful here, I was able to do an acceptable job with just a jigsaw.  I do plan on filling in all the cracks and screw holes, sanding, and painting when everything is done, so I doubt anything will show.  The bottom board is held in place with horizontal 1 5/8″ trim screws screwed through the side boards. 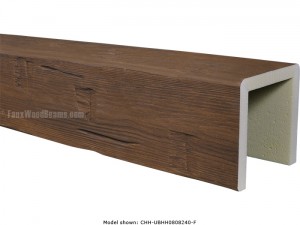 Just so you know, what I really wanted to do was get a pair of faux wood beams from (get this) FauxWoodBeams.com.  I especially like their custom hand hewn beams, and am seriously considering trying to duplicate the look of them with my cedar beams.  The only negative to these is their price, about $375 (excluding shipping) for an unfinished 6 1/2″ x 4 1/2″ x 20′ beam.

14 thoughts on “Covering the Beams”