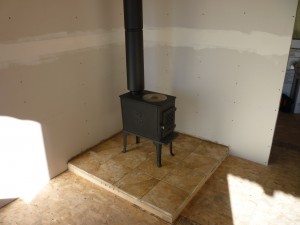 When it came time to choose a heating system for the cabin, a wood stove was the logical choice.  Cut and dried firewood is very reasonable around here, and if I’m so inclined someday I have plenty of trees to cut my own.  The wood stove I selected was the diminutive Jotul 602.  It’s the smallest one they sell, and it’s still rated to heat up to 800 square feet – more than adequate for my needs.  Another stove I would have liked is the Morso 1410 (Squirrel) , although it doesn’t have a cookplate and only takes 12″ logs.

The first thing I had to do though was install a chimney.  For ease of installation, and low cost, I chose an insulated stainless steel chimney.  While there are many good brands to choose from, I went with Selkirk SuperVent mainly because it was available for a reasonable price at my local Menards.  The biggest decision with a chimney of this type is whether to go out through the top or the side.  If this was a single container without an added roof, the best option would be to go out the side.  Since I have a roof over my containers, and I like the look of a chimney going through the roof, I chose the roof exit.  In all honesty though, going through the side would be much easier if you don’t mind that look. 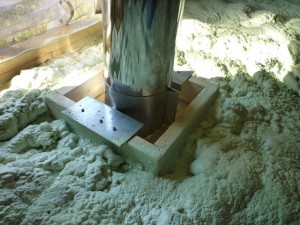 If you choose to go out the roof like I did, you might wonder how you are going to support the chimney.  All of the chimney support boxes I saw at the store seemed inappropriate for the top of a shipping container.  A quick call to the people at Selkirk solved my problem.  They make a generic roof support that was just the ticket for supporting the chimney on the container roof.  It wasn’t an in stock item at my local Menards, but I was able to special order it through them.

Installation of the roof support itself was pretty easy.  I first cut a hole through the roof of the container just large enough to pass the chimney through.  I then made a 2×4 frame with interior dimensions of 12″x12″ – this provides the required 2″ air space to combustibles for my 8″ OD chimney pipe.  I then attached the roof support to a 2′ section of chimney, dropped it down through the hole, and finally screwed the roof support to the 2×4 frame.  A final adjustment was needed to make sure the insulated chimney extended a minimum of 3 1/2 inches below the ceiling, and then the clamping bolts of the roof support were tightened.  To seal everything up, I applied Rutland 600° RTV Silicone Sealant around the chimney both inside and outside of the container roof.  I also used some silicone to secure the 2×4 frame to the container roof – it seemed to work well. 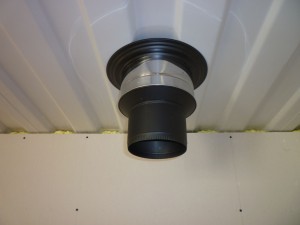 Inside the cabin you can see the insulated chimney penetrating about 4″ into the interior along with the required stove pipe adapter screwed in.  To hide the hole, and the large amount of red silicone sealant I used, I was able to slide an 8″ black stove pipe decorative ring over the chimney to give the installation a more professional appearance.  I will probably try to paint the exposed stainless steel chimney black sometime in the future for appearance sake, but for now it works as it’s supposed to.

While installing the roof support was easy, running the chimney through the finished metal roof was not.  I did frame an opening for the chimney when I built the roof, so that was OK.  The problem was cutting through the steel ridge cap and roofing panels.  The thin steel had no support in that area and flopped around when trying to cut it with either my jig saw or RIDGID multi-tool.  I finally gave up and just cut the opening out with hand snips from underneath the roof.  It’s definitely not pretty, but it works and you can’t see it from the outside.  I have to keep telling myself that it’s just a cabin.

The Jotul is connected to the chimney with double walled stove pipe.  I could have used single wall pipe, but it would have cost more for a larger heat shield around the stove.  I have two 47″ wide by 36″ tall galvanized steel panels that I will be installing on the walls around the stove – with a 1″ airspace behind.  Single wall stove pipe would have required the steel panels to run up to within an inch of the ceiling.

Just a quick comment on the hearth pad.  It is composed of a 2×4 frame (laid flat) on the floor, 3/4″ plywood, 1/2 DUROCK cement board, and ceramic tile with grout on top.  A good article on building hearth pads can be found at the Woodstock Soapstone Company.

I got the chance to try everything out this last weekend and it seems to work well.  The temps were right around freezing, and it had no problem keeping the cabin warm.  I still need to test it out on one of those really cold below zero weekends just to be sure though.  The only issue with the 602 is that it isn’t large enough to heat through a cold night on a single loading.  Someone is going to have to feed it at least once during the night.

14 thoughts on “Wood Stove and Chimney”