My shipping container cabin is starting to look less like a bunch of containers and more like a real cabin – at least when the doors are open.  The biggest single change has been the addition of a deck at the end of September.  This one thing has made working on and staying in my cabin so much easier that I wish I would have done it sooner.  It also allowed me to finally install the two large gliding windows on the right.

I had started on the chimney a few weeks back, but the entire insulation fiasco delayed it until last weekend.  It’s now in place with the wood stove hooked up and seems to be working well.  I’ll go into a bit more detail on the wood stove and chimney in a later post. 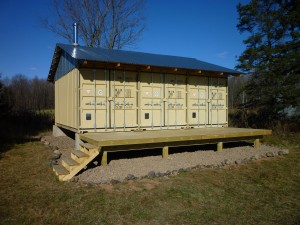 With the deck finally in place we were able to tidy up the landscaping a bit.  I had one of my sons and his friend up to lay some new fabric, build a field stone border, and add some more gravel.  Over time I’ll probably add more and bigger rocks to the border since I have literally thousands of field stones in several rock piles around the farm field.  I just need some young strong backs to do it for me.

11 thoughts on “Deck and Landscaping”