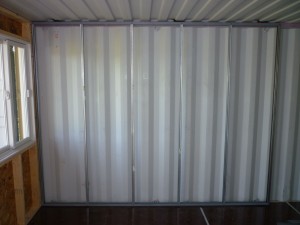 The interior framing is mostly done, except for a couple of the partition walls.  As mentioned previously, I chose to use 1 5/8″ UltraSTEEL steel studs from Dietrich Metal Framing for the space saving aspect over traditional wood studs.  In retrospect, I’m not so sure I would do it again.  I only saved about 2″ on two sides of the cabin, which worked out to be just six square feet of floor space. While building the steel walls is not that difficult, it is time consuming when you have to clamp and screw each stud in four places.  Building a traditional wood framed wall is so much easier, especially when you have a power framing nailer.

Before I set the stud walls in place, I affixed 1/2″ foam sheathing on the upper box beam to create a thermal break between the steel studs and the shipping container.  Since steel conducts heat so well, a direct connection between the studs and the container would cause heat loss through the walls.  The cold studs could also cause formation of condensation on the finished drywall.  This additional step would probably not have been necessary with wood studs, and is yet another reason to just stick with wood studs. 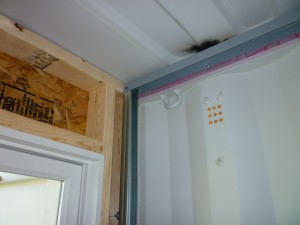 The upper track is secured into the box beam with #10 thread cutting screws from Fastenal.  I pre-drilled the screw holes using a 5/32″ drill bit – the steel is fairly hard so plan to use a cobalt bit if you do this.  I also left a 1/2″ space above the upper track to add some spray foam insulation between the studs and container.  If you’re wondering what the group of nine holes are in the picture, they are part of two ventilation ports that were in each container. There are only two left since combining the containers, and I do plan to keep them functional for added ventilation.  They are already screened and protected from the weather on the outside, and I plan on attaching PVC pipe to them on the inside to pass through the drywall. 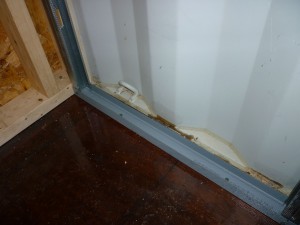 The bottom track is just simply attached to the wooden floors using 1 1/4″ coated decking screws.  Coated screws should be used to resist any treatment chemicals that might be present in the plywood floors.