I finished the exterior walls a few weeks ago, and everything went together fairly well.  I decided to use standard 2×4 wood studs for the exterior walls since I’m comfortable framing in windows and doors with them.  For the interior framing I am using 1 5/8″ steel studs mainly for the space saving aspect, although I will be discussing that separately in an upcoming post.

The first step was to take the frame wall and fit it into place.  I held off on the internal 2×4’s so I could more easily drill through the outer studs and container walls for the attaching bolts.  I also made sure there was at least a couple of inches between the framing and the closed doors to account for the sheathing, and window and door protrusions.

The upper corners of each wall needed a notch cut out to accommodate the side box beams. 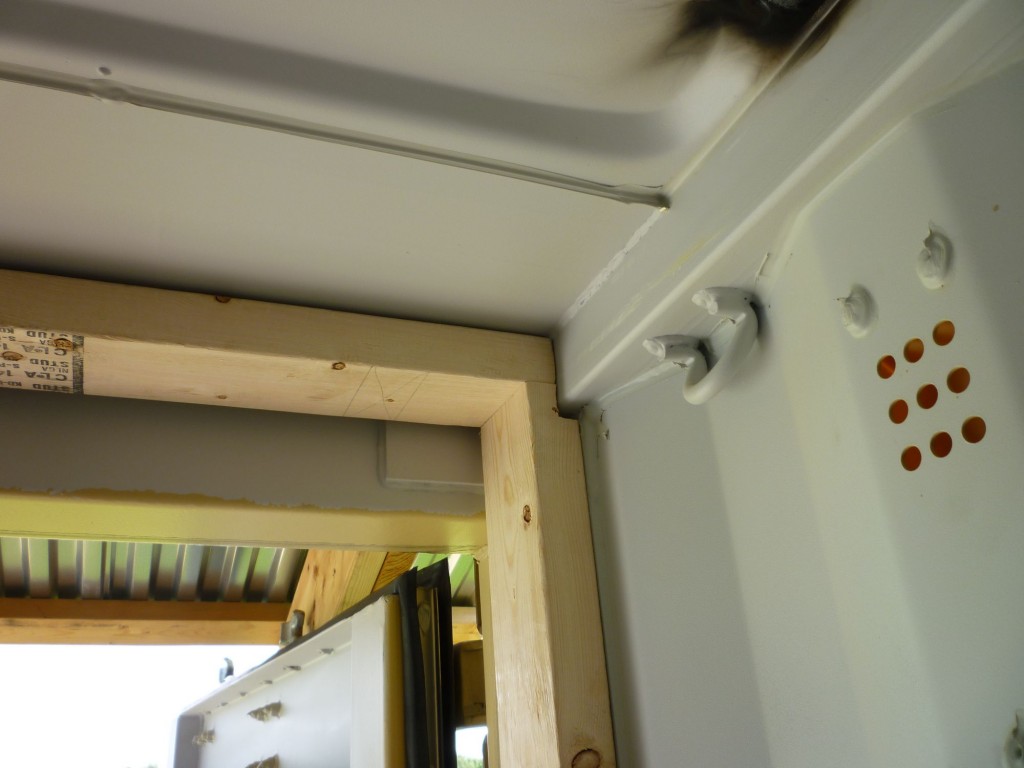 The lower corners fit fine as is. 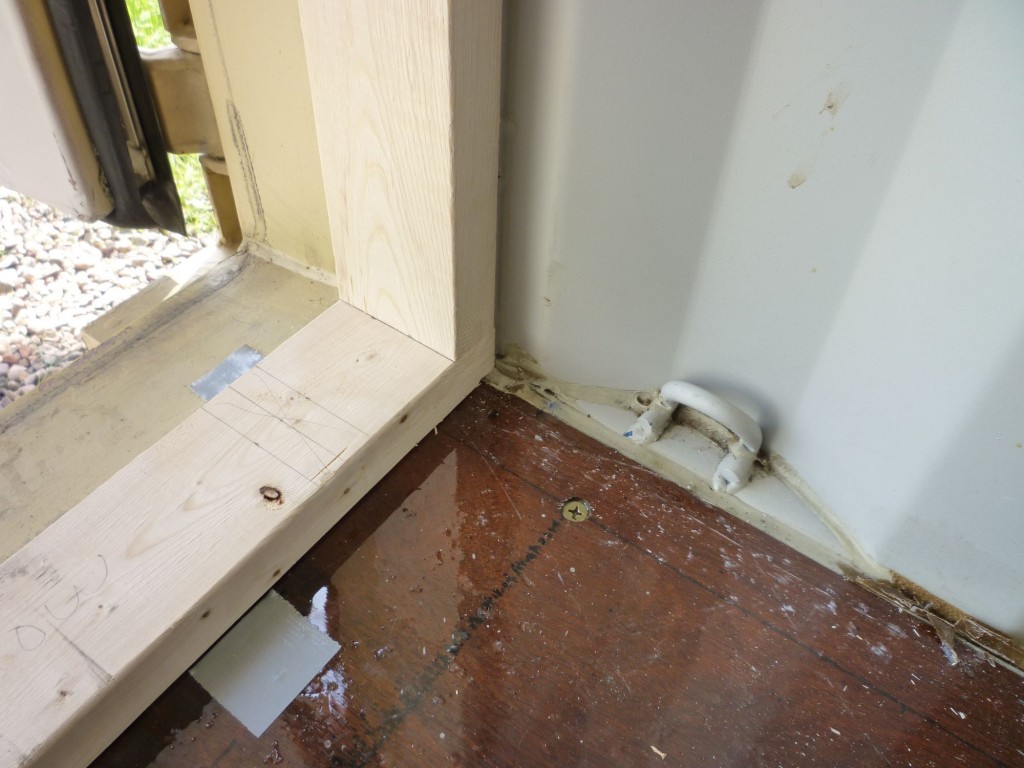 Each side is held in place with three 5/16″ bolts.  The holes for the bolts were drilled with a 5/16″ Cobalt drill bit.  The bolts that pass through the exterior walls of the cabin are galvanized with bonded washers to prevent any moisture infiltration, while the interior bolts are just standard zinc coated ones.

You might have noticed that the framing looks somewhat incomplete compared to conventional construction.  Keep in mind that these are non-load bearing walls and as such it’s not necessary to include double top plates, headers, or even jack studs under the windows.  It’s also not that adding these would have been a great burden, but I would rather have insulation than framing members on an exterior wall.  Here’s an article on Advanced Framing Techniques that gives an overview of reduced framing for non-load bearing walls.

Here’s one side that shows the three galvanized bolts that pass through the container.  These bolts, along with the three on the other side, should be the only penetrations of the container sides. 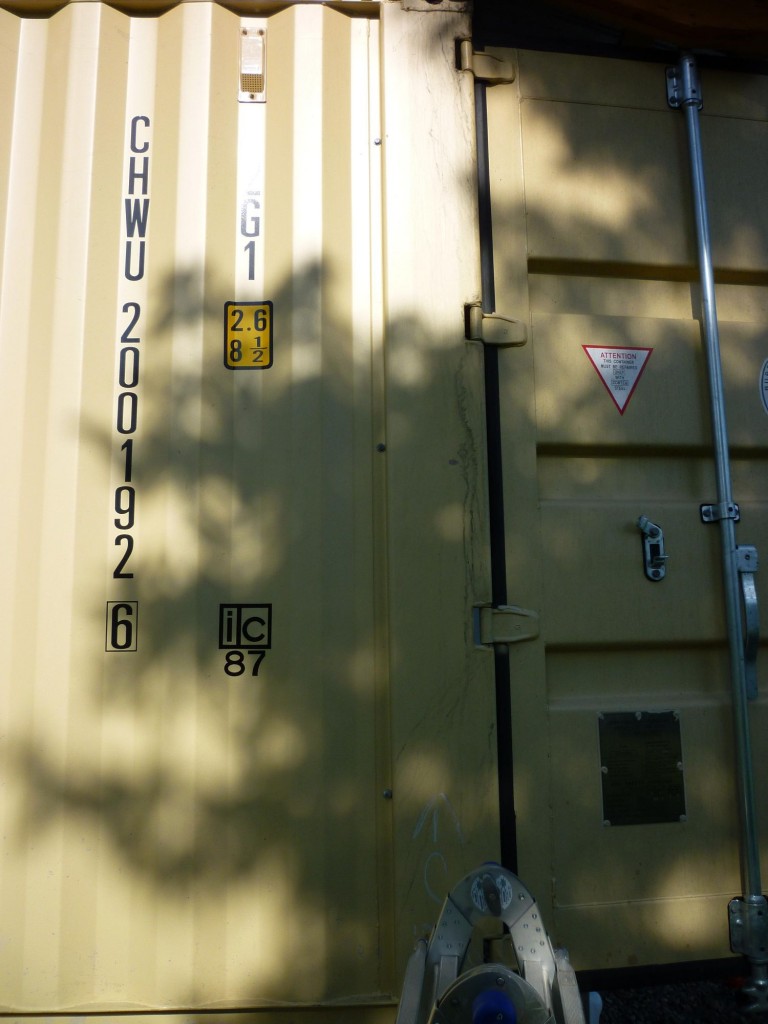 Here’s a closeup of a bolt with a bonded washer. 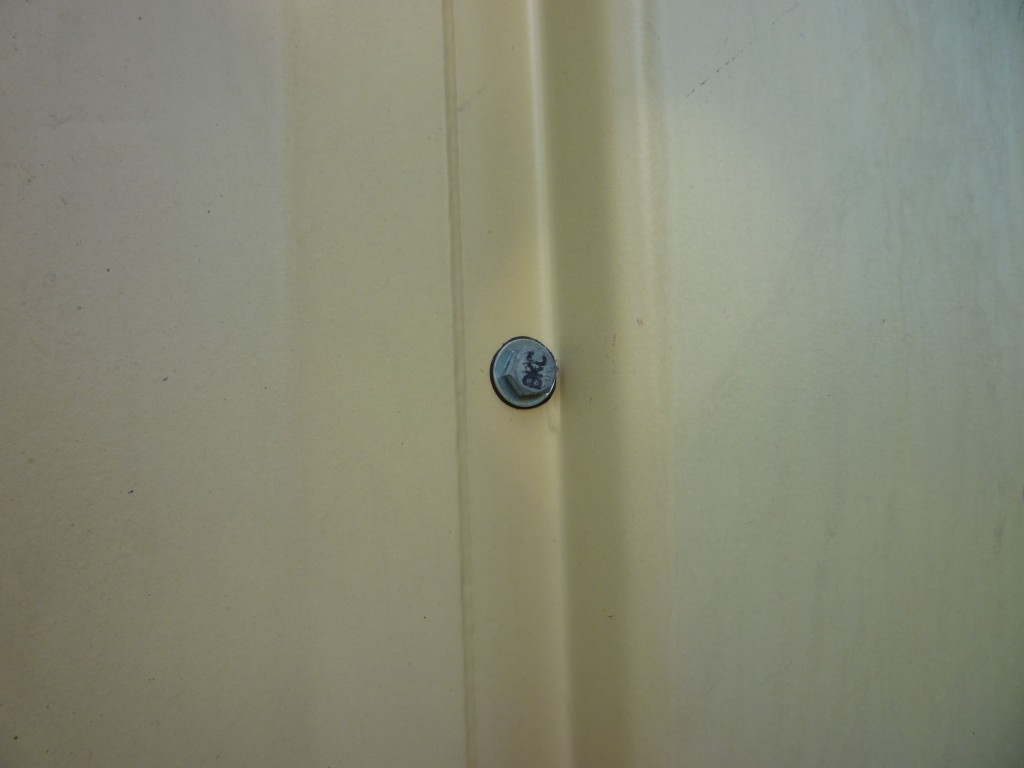 This is a completed framed wall for one of the two large windows. 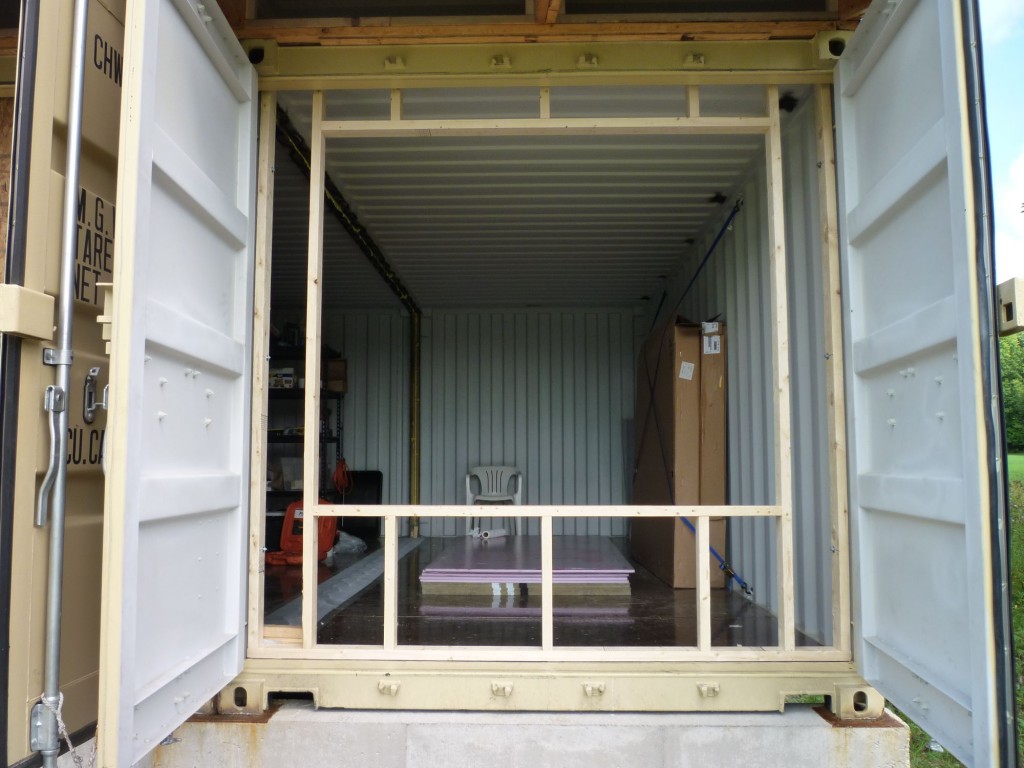 This is one of the framed walls covered with 7/16″ OSB before the window opening is cut out.  BTW, don’t try to apply the sheathing horizontally as it cannot get past the doors – vertical is the only way it will work.  Fortunately I was able to salvage my first panel when I tried to do just that. 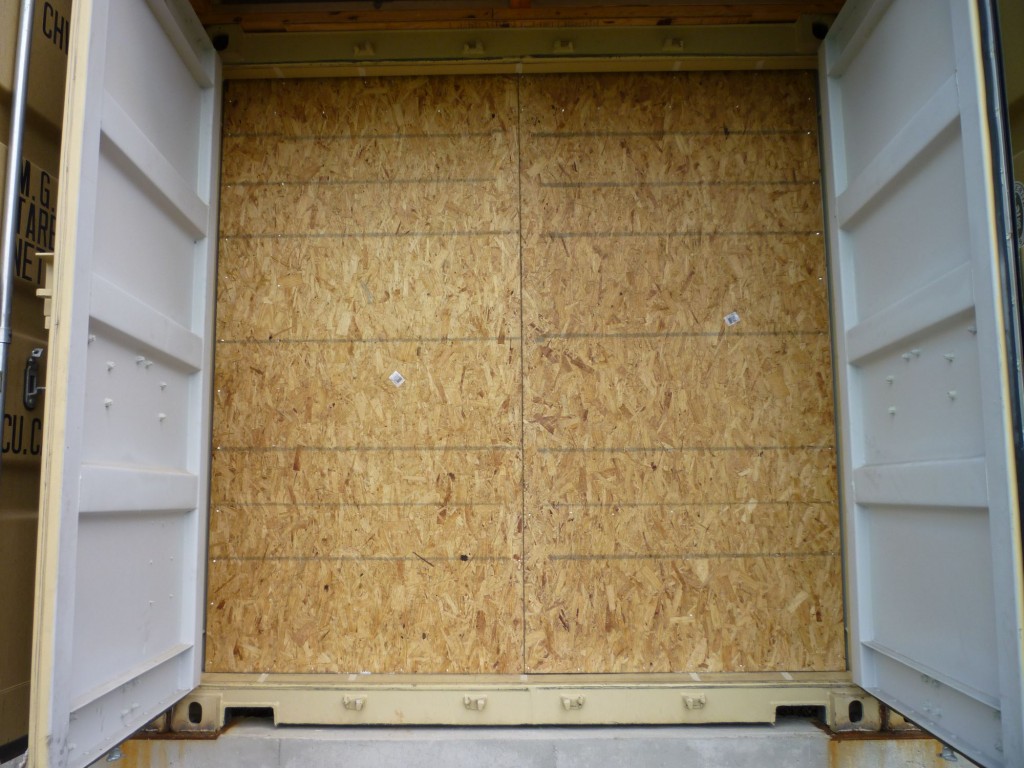 The sheathing is covered with 30 pound roofing felt with double coverage on the bottom, and the Anderson 200 window is sealed around the perimeter with a butyl flashing tape.  I’m not sure how necessary the tape is on this cabin since the container doors will be closed and protecting the windows most of the time.  It also has a 3 foot roof overhang which should keep most of the rain away even if the doors are open.  I guess overkill never hurts in construction. 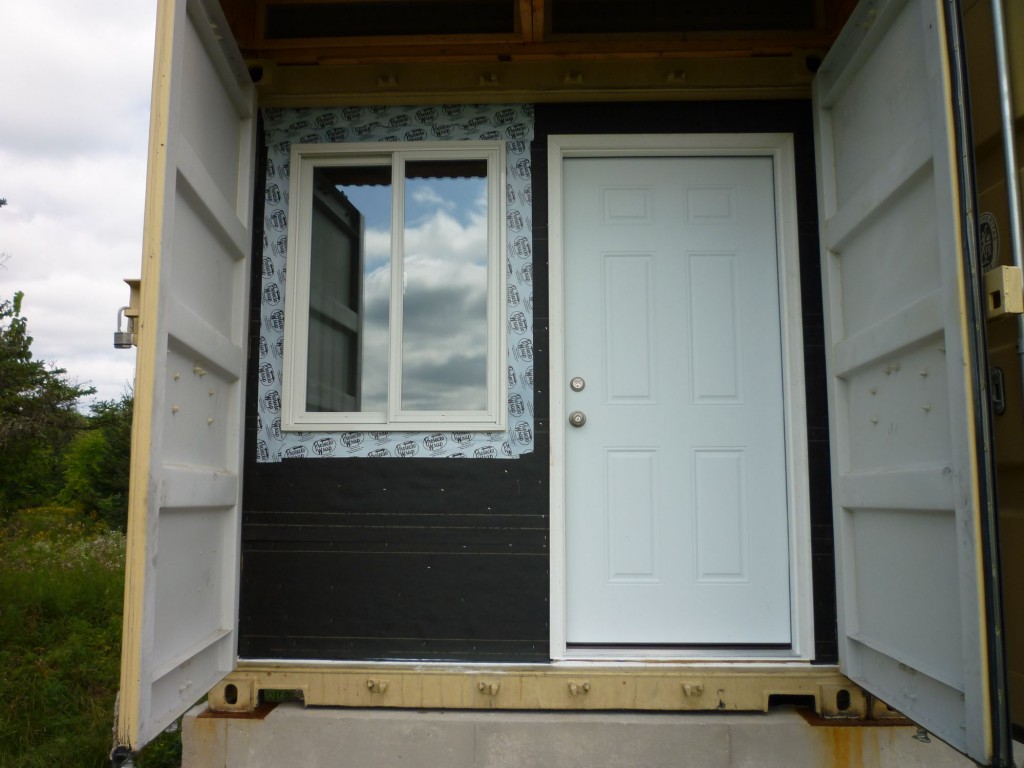 Here’s the view out of the two window openings.  When I get a chance to router out the rafters for the locking bars, the doors should swing out wider and not be visibly in the way as much. 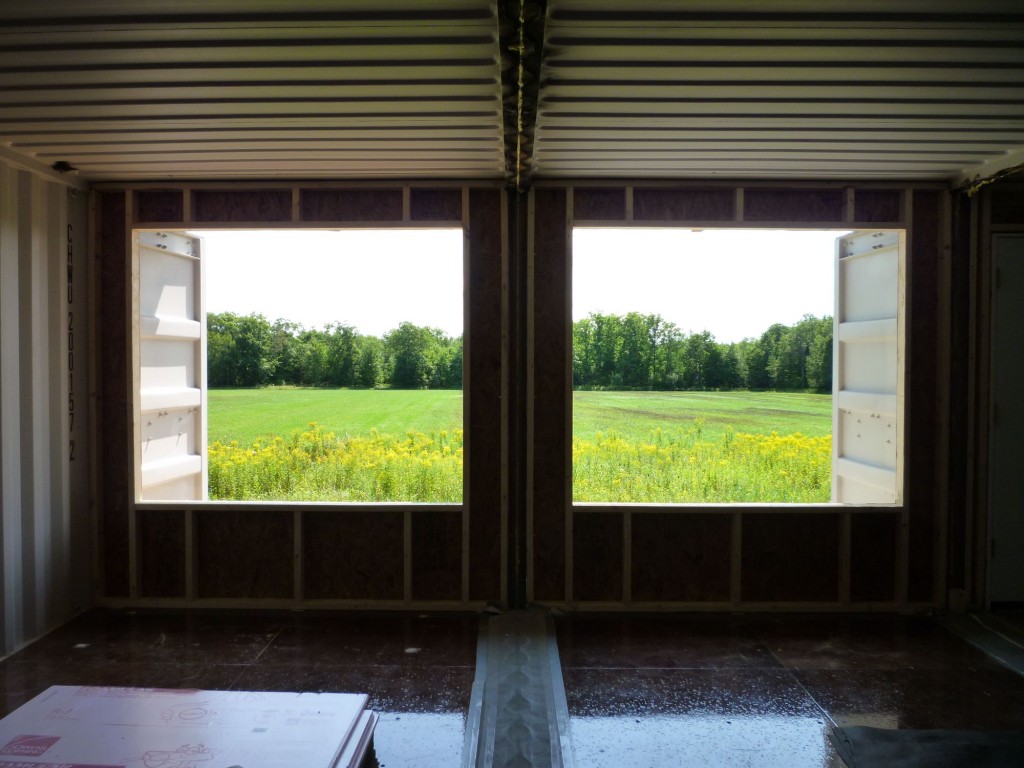 Here’s a view of the entire southern wall.  It’s actually much brighter inside than the camera shows. 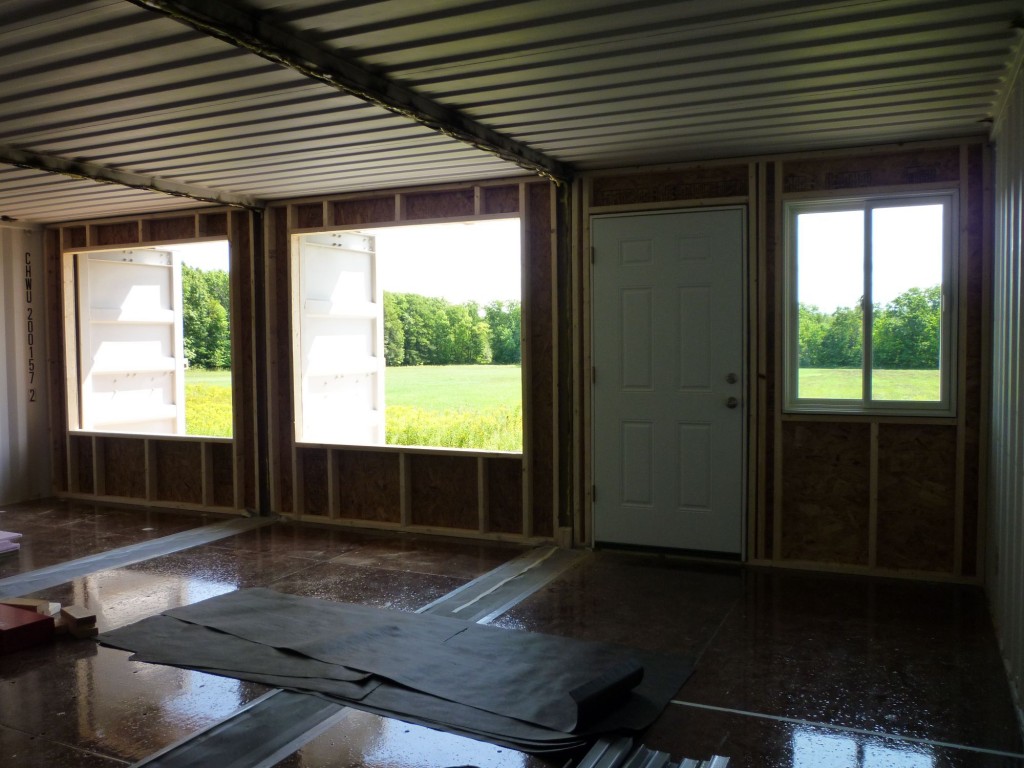 The cabin is almost fully enclosed.  I still have to wait for a few extra guys to help me with the large windows as they are very heavy.  My son and I were able to spend the night in it over labor day with the doors closed on the unfinished walls.  It dipped down to the upper 30’s that night, and I have to tell you it was very cold in those containers without insulation. 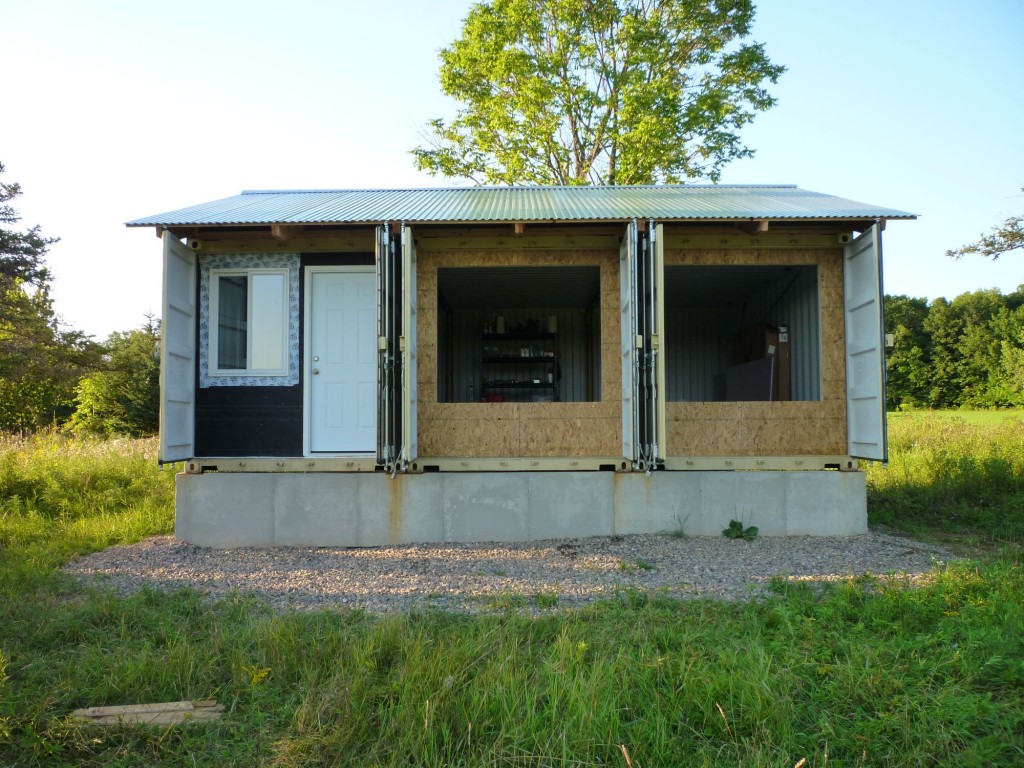