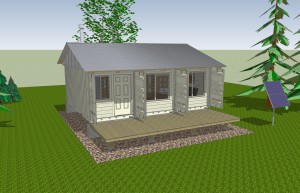 I started designing the cabin sometime during the Winter of 2008/2009.  There were a lot of different configurations I was considering – one or two story, three or four containers, and whether or not to cut new openings into the containers.  Most of my initial work was with paper and pencil to quickly try out different layouts.  If something showed promise, I would move to SketchUp to see how it worked there.

One of the more tempting variations was that of a two story, four container A-frame type of design.  There is a lot going for this design since the containers themselves can be the structural base for a gable roof.  The main difficulty I saw with a two story design was how to properly seal and insulate between the lower and upper floors.  Although it has been done before, in the end I wanted simplicity when it came time to build.

Deciding on the number of containers to use was mainly a function of how much space I really needed.  I have always been intrigued by compact housing, so I tried to be as efficient as possible.  Some will surely think my cabin is too small, but for how I plan to use it, it will be more than adequate for me.  For anyone interested in examples of VERY small houses, I recommend you visit the Tiny House Blog.  My place seems palatial compared to some of those.

The three 8’x20′ containers I chose to use gave me about 450 square feet to work with.  Within this space I wanted an entry area, living room, dining table, kitchen, kids bedroom, and bathroom/storage.  The entry area is a necessity, especially when groups of hunters come in from the snow.  The wood stove is close by to dry any wet clothes, and to make it easy to drop off the incoming firewood.  The living room will do double duty as the adult bedroom with a queen sized sofa bed.  Notice that everything revolves around the dining table.  It will be the most used location in the cabin between mealtimes and playing cards at night – one advantage of not having a TV up there.  The “bathroom” will be somewhat limited, and will only have a small sink and a urinal – for anything more serious I already have a nice outhouse with a beautiful view.

7 thoughts on “The Initial Design”