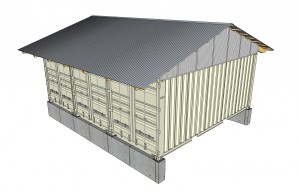 I guess the first roof related decision for a shipping container builder is whether or not to even have one.  Considering that I have three connected containers, am in Wisconsin with ~50 psf snow loads, and that the inner walls are removed,  I felt a roof was a good idea.  In designing the roof I needed to consider the style, pitch, overhang, roofing material, and structure.

A flat roof is tempting with shipping container buildings, and that’s what you see a lot of, in addition to no roof, in artists drawings of them.  A flat roof in Wisconsin just doesn’t seem right though, and would be somewhat out of place in the country.  Shed roofs are attractive, at least to me, easy to build, and would definitely fit in around here.  Unfortunately, even with a minimum 3:12 pitched roof, I would not be able to get the amount of shading I wanted with the roof peak on the southern side.  This left the gable roof, which is OK with me since it fits in well around here – I was looking for a steel pole barn sort of appearance anyways.  It’s also nice to have room under a roof to run wires, install stacks, store stuff, whatever.

I would love to have a 12:12 roof pitch.  There would be a LOT of space underneath, my solar panels could be mounted flat to the roof, and any snow would just slide right off.  Unfortunately, I also need enough overhang to completely shade my south facing windows in the summer as I don’t plan on having any air conditioning.  A 12:12 pitch would not extend out far enough and still have clearance for the doors – at least not in the style of roof I wanted.  The best I was able to accomplish was a 4:12 pitch which will be adequate. 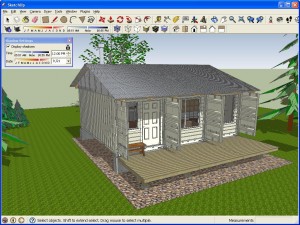 I’m going to bring up my favorite tool again – Google SketchUp.  SketchUp has a great feature that enables you to design the perfect overhang for your specific building and location.  If you set the coordinates and orientation of your building, you can see the shadows as they will appear for any date and time.  For the hottest months of the year, almost no direct sunlight will enter the south facing windows of the cabin.  Conversely, the coldest months will allow all of the sunlight, and warmth, to come in.  The overhang I needed to accomplish this was right around 3 feet.

This wasn’t too hard of a decision, as a metal roof just seemed appropriate for a shipping container cabin.  A metal roof has so many advantages over shingles, especially in regards to the ease of framing and installation.  I did choose to go with galvanized panels mostly from an appearance standpoint, although coated steel would probably be more durable. 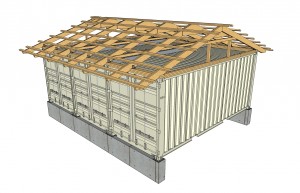 Since I was using metal panels, a combination of rafters and purlins would be an efficient choice.  Several friends tried to talk me into trusses instead of rafters, but I really don’t like the look of them, access under the roof can be difficult, and the steel support beams that are in the way would have required some expensive custom trusses that would not have saved me much money.

The rafters themselves are dual 2×8’s four feet on center.  Note that for the snow loads this cabin could experience I needed to use Doug Fir lumber which just barely meets the limits.  Any more snow load, or a lesser grade of lumber, would have required dual 2×10’s.  If I had chosen dual 2×10’s I could probably have increased the spacing to eight feet, although that would have required the purlins to be oriented vertically either on or between the rafters.  As it is, the purlins are 2×4’s laid flat every 2 feet.  I could also have used single 2×8 rafters every 2 feet, but I like the more substantial appearance of the dual 2×8 beams. 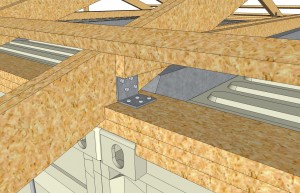 I probably/hopefully over-designed the roof just a bit, but with a cabin this small the extra cost will be minimal.  Each set of rafters is connected at the top by two 5/8″ plywood gussets, and connected to the top plate with four steel angle plates that have eight 1/4″ SPAX lag screws each.  Two of the middle rafters have 2×4 rafter ties on each side to help prevent any possible rafter spread.  The top plates at the eaves are dual 2×8’s attached to the containers with welded angle plates, while the top plates at the gable ends are dual 2×4’s.

Two additional roof details are the chimney opening and protection from animals.  I,m planning for the chimney to be at the peak of the roof, and I hope this will minimize the amount of flashing that is necessary – we shall see.  To protect the “attic” of the cabin from nesting birds, red squirrels, and insects, there will be blocking between the purlins on the gable ends in addition to insect screen on the gables and eaves.  There are also foam closures between the end purlins and the metal panels, and ridge vent material at the peak under the ridge cap.  Aside from protecting the attic space, this should also provide for adequate ventilation in the summer months. 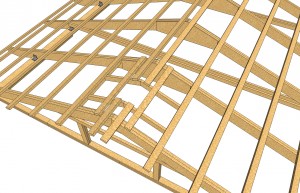 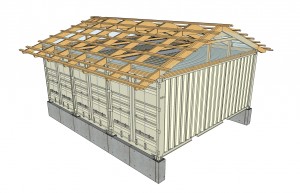