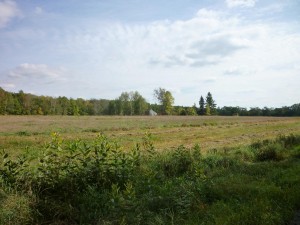 Looking southeast over the farm field with the old hunting shack

It’s about time I got around to talking about my new cabin – I’ve only been planning and working on it for over a year now.  I’ve had a beautiful 40 acres of farmland and woods in Northern Wisconsin closing in on 20 years now, and have never really done much with it.  I’ve used it mostly for hunting over the years, but I have always wanted to use it for more than that.  What’s kept me from that is not having a decent place to stay, especially for my wife.

The hunting shack that I built long ago has not aged so well, but it did keep me warm and dry during many a deer season in Wisconsin.  I had always planned on building a better cabin, but something always got in the way – jobs, kids, money, etc.  By the time I was actually ready to do something, I ran into a bigger problem – break-ins and theft.  The last straw was a couple of years ago when someone broke into my cabin and almost burned it down.  They decided to hang a kerosene lantern from the ceiling, and somehow it got out of control and started the ceiling on fire.  Fortunately I had a fire extinguisher in the cabin, and whoever broke in had the decency to put out the fire out – thanks.

I then did what any self respecting computer programmer would do – search the Internet to find a solution.  There were lots of interesting ideas out there ranging from underground houses to monolithic domes, but the one that really intrigued me was the idea of using shipping containers for construction.  What interested me the most about these containers were the large metal doors that could be securely closed to the elements, and vandals.

In the months to come, I will try to share all that I have thought about and learned through this process.  Hopefully it will help others who are thinking about building with shipping containers.